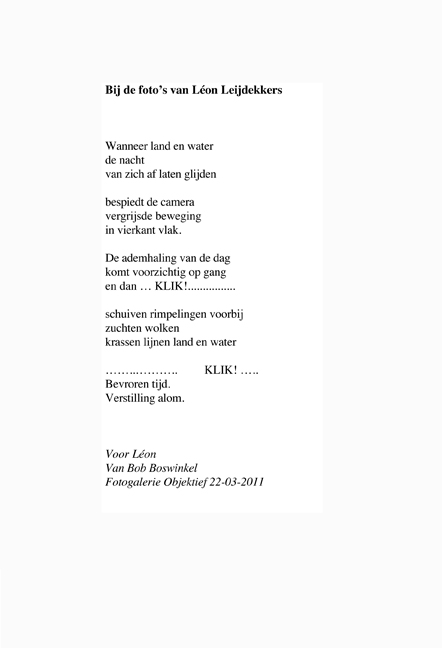 Participation in two exhibitions with my friends from Echiquier


Exibition in Taranto for Alzheimers Patients


My London debut exhibition at the Brick Lane Gallery, September 2015:

A really nice photographic start to 2014!

Several of my images have won titles at the One Eye Land competition 2012. The site is updated; an Archive with earlier works is formed and the number of portfolios reduced.

Some new work is added: mainly images from Pembrokeshire, Wales.

a preview of some works on display here are to be found in the "Exhibition" section. Uploaded new work with images from Ireland and the Netherlands Uploaded impressions of my visit to the Mont Saint Michel in Februari 2010. They can be found in the folder "Exhibition".

I uploaded a collection of impressions of my visit to the D-day sites beginning of this month.
They can be found in the folder "Exhibition" and will remain there temporarily.


On this memorable day the website "Monochrome Journeys" has been launched. The site is continually updated and new images are added frequently. In Januari 2010 the first Temporary Exhibition will start.
Next
Previous